Strengthening the Third Pillar of the Canadian Union

An Intergovernmental Agenda for Canada’s Charities and Non-Profits

Canadian governments have made significant efforts over the past two decades to strengthen the pan-Canadian economic union, as well as the social union. These have produced tangible results for Canadians. For example, interprovincial trade barriers have been falling and social benefits are now more portable between provinces. However, we have not expended similar effort for the non-profit and charity sector. This paper outlines an intergovernmental agenda for strengthening this third pillar of the Canadian union.

Canadian governments have made significant efforts over the past two decades to strengthen the pan-Canadian economic union, as well as the social union. These have produced tangible results for Canadians. For example, interprovincial trade barriers have been falling and social benefits are now more portable between provinces. However, we have not expended similar effort on the third pillar of the Canadian union—the non-profit sector.

Some provinces, including Ontario and British Columbia, are putting in place measures to put charities and non-profits on firmer financial footing. This includes allowing them more ways to generate revenues through entrepreneurship or “social enterprise.” Yet these strategies are not consistent with some federal regulations. Canada’s charities are caught in the crosshairs of Canadian federalism.

This is a quintessentially Canadian problem. Provinces have constitutional responsibility over charitable and provincially incorporated non-profit entities, while the federal government has authority over their taxation benefits under the Income Tax Act. Under this confusing arrangement, the Canada Revenue Agency’s (CRA) regulatory activity and the federal Income Tax Act are proving a barrier to many of the activities that some provinces are trying to nurture.

Overlapping federal and provincial responsibilities and barriers are commonplace in Canada, but in response, governments have established processes where Ministers and public servants meet to coordinate their activities and reduce the number of overlapping and conflicting regulations.

No such effort exists with respect to the non-profit sector. There is no process underway to streamline federal-provincial roles and to coordinate policy, and there is no venue for provinces and territories to discuss issues affecting the sector, let alone to begin the process of lowering interprovincial barriers to a more sustainable non-profit sector.

Three main recommendations emerge from this analysis. First, the federal government should consider legislative changes (namely to the Income Tax Act and the bureaucratic interpretations of that Act) to allow charities and non-profits more flexibility in how they use and generate funds. This would encourage provincial efforts to strengthen the sector. The UK experience represents a promising model.

Second, the federal and provincial/territorial governments should establish a formal intergovernmental process to coordinate their policies and approaches to the sector.

Third, provinces and territories should establish their own process to harmonize rules and regulations affecting the sector, similar to the processes they have established to facilitate greater labour mobility between provinces. 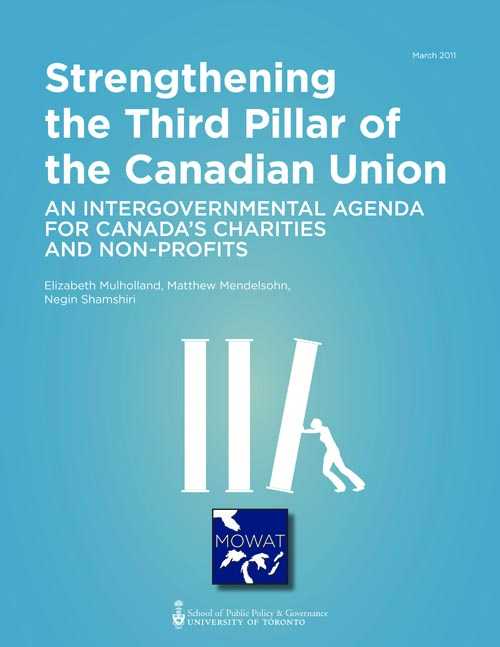 Breaking the Inertia Repositioning the Government-Sector Partnership The social sector is a key strategic partner to Canadian governments as they seek to address big chal...
Turning a Corner Laying the Groundwork for Charity Regulatory Reform in Canada Mowat NFP's new release, the second in its Enabling Environment series, aims to set the...
Charting a Path Forward Strengthening and Enabling the Charitable Sector in Canada Charitable and nonprofit sector modernization has been the subject of much recent debate a...