The federal government has signalled its willingness to re-evaluate the intergovernmental framework supporting active labour market policy – the programs governments provide to help unemployed Canadians get back to work.

These programs are crucial to ensuring workers do not get locked into cycles of long-term unemployment. This paper outlines some major problems with the current transfers system, including its link to EI and interprovincial inequality, and proposes solutions for a more equitable, responsive, and open framework.

Active Labour Market Policies (ALMPs) are the government programs that help un- and under-employed workers improve their skills and find jobs. Collectively, they make up the public employment service. They can be crucial to protecting individuals from the pernicious, cyclical effects of long-term unemployment.

But the framework for ALMPs in Canada has not kept pace with changes to the labour market. This should be a major concern. Structural changes to the economy are underway, including a shift away from manufacturing and towards gig and part-time work, and ongoing impacts from automation across sectors. We need a functioning public employment service, and this starts with better, more rational federal-provincial collaboration.

ALMPs are a joint federal-provincial responsibility. Since the mid-90s, provinces have been the central actors, while the federal government funds programs through a number of transfer agreements. The largest transfers, Labour Market Development Agreements (LMDAs), are funded from Employment Insurance (EI) premiums, and provide skills training programs only to workers who are currently or were recently eligible for EI. This is an increasingly smaller proportion of unemployed Canadians. Moreover, the allocation of funds among provinces is unfair and unprincipled, creating greater inequity between unemployed Canadians.

With the federal government announcing new investments in the public employment service, the time is ripe for reform and re-engagement. In this report, we outline the current ALMP framework, including all the major existing program streams. We examine the existing international and Canadian evidence on ALMPs. We then identify five major challenges to the Canadian framework.

First, there is built-in inequity, between unemployed Canadians who are eligible for EI, and those who are not. We argue that there is no persuasive policy logic for designing a public employment service which is most generous to EI-eligible workers. The people who need the most support receive the least.

Second, there are major problems with how ALMP resources are distributed across the country. The LMDA funding formula allocates money disproportionately between provinces, systematically underserving Ontario and the Prairie provinces without offering any rationale for why.

Third, the mosaic of existing federal, provincial, and third-party programming is deeply complex and user-unfriendly.

Fourth, stakeholders universally complain that we do not have good enough labour market data. To make smart policy, we need a clearer picture of the labour market as it exists today.

Fifth, the fragmented nature of the transfers system limits the flexibility of provinces to experiment with balance in program design. There are both supply and demand sides to employability, and provinces’ ability to reflect this is limited by the structure of federal transfers.

We argue that a renewed public employment service must be:

Equitable
Between unemployed Canadians needing help, between communities, and between provinces and territories;

Open
Meaning the programming should be understood by prospective clients and employers, and should be evaluated on an ongoing basis against high quality data.

To that end, we suggest the following concrete actions be taken: 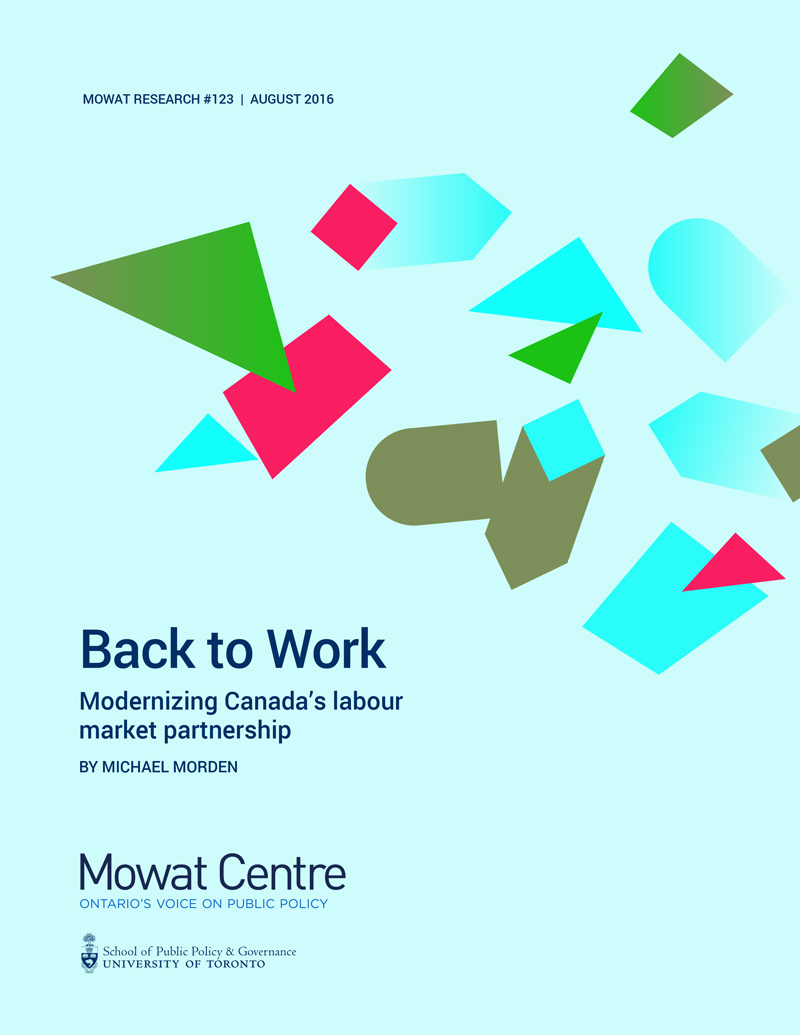 Facilitating the Future of Work Through a Modernized EI System Gaps in Canada’s Employment Insurance program are already leaving too many workers behind as gig work, part-time jobs and self-employment grow. EI nee...
A taxing problem: Canadian cities desperately need new sources of revenue Canada’s municipalities are at the forefront of delivering a growing array of vital services to citizens, ranging from affordable housing, transit and...
Rethinking Municipal Finance for the New Economy While ongoing economic and employment trends are constraining government revenues globally, municipalities in Canada face additional challenges due to...